Tell me about... getting there

We recommend you pick up a hire car at the airport.  See car hire companies at local airports.  A hire car is the easiest way of doing the transfer, can be cheaper than return taxi transfers, and will help you get more out of the area (even if you don't need the car some days).

The best route, which takes just 2 hours, is from Malpensa to Busto Arsizio Nord (13 minutes), and from there to Novara Nord (29 minutes).  From Novara Nord station it's a few minutes walk via an underpass to the main train station (just "Novara"), from where there are direct trains to Orta-Miasino (50 minutes).  Between Malpensa and Novara Nord the trains are frequent, but between Novara and Orta-Miasino the trains are less frequent with a big gap mid-morning, and no trains on Sundays between Novara and Orta-Miasino (Sunday service was stopped in 2017).  The train from Malpensa Airport was extended to Terminal 2 in early 2017.  There are now stops at both Terminal 1 and Terminal 2, see the timetables below.

Orta-Miasino station is actually in Legro, less than 1km from Orta San Giulio, 1km from Miasino, 2km from Vacciago, and 3km from Lortallo.

Here is the Timetable from Malpensa to Orta-Miasino (updated January 2018).  Mon-Sat means the trains run every day except Sunday.  Mon-Fri means the trains do not run on a Saturday or Sunday.  Always check the times of your chosen train on www.trenitalia.com or www.lefrecce.it for the actual day of your journey.

There are sometimes taxis at Orta-Miasino station, or ask in the station bar to book you a taxi.

· It's walkable from Orta-Miasino station to Orta San Giulio in about 20 minutes if you have light luggage.  Left out the station.  Left at the end.  Pass under the railway bridge and walk down to the roundabout (cross on the right at the zebra).  Straight over the roundabout.  Turn left after the Villa Crespi, and keep going (as you round the corner, this is the nicest bit and by far the best way to arrive in Orta!).

· It's also possible to walk from Orta-Miasino up to Corconio, Vacciago and Lortallo on footpaths staying off the roads in about 35 minutes if you have light luggage.  Right out the station and follow the road (called Prisciola) up the hill.  At the T-junction:

Here is the Timetable from Orta-Miasino to Malpensa (updated January 2018).  Mon-Sat means the trains run every day except Sunday (this applies to all trains in this direction).  Always check the times of your chosen train on www.trenitalia.com or www.lefrecce.it for the actual day of your journey.

If these train times don't suit, or you need to stay a night at the airport anyway, there is a Sheraton Hotel at Malpensa Terminal 1, and a Moxy Hotel (+39-02-9475.7100, part of the Marriott group) at Malpensa Terminal 2.  Both of these are right at the respective terminals.  In addition, there are several hotels located between the two terminals (so not really at either), including a Holiday Inn, Idea Hotel and Crowne Plaza.  You will find all these hotels on booking.com and the other main accommodation sites.

All our holiday homes are easily reached by road, and detailed directions are supplied in your location pack.

Travelling by Car from the UK

Lake Orta is just 670 miles from Calais (just two thirds of the distance to Tuscany!) so it's an easy two day drive. 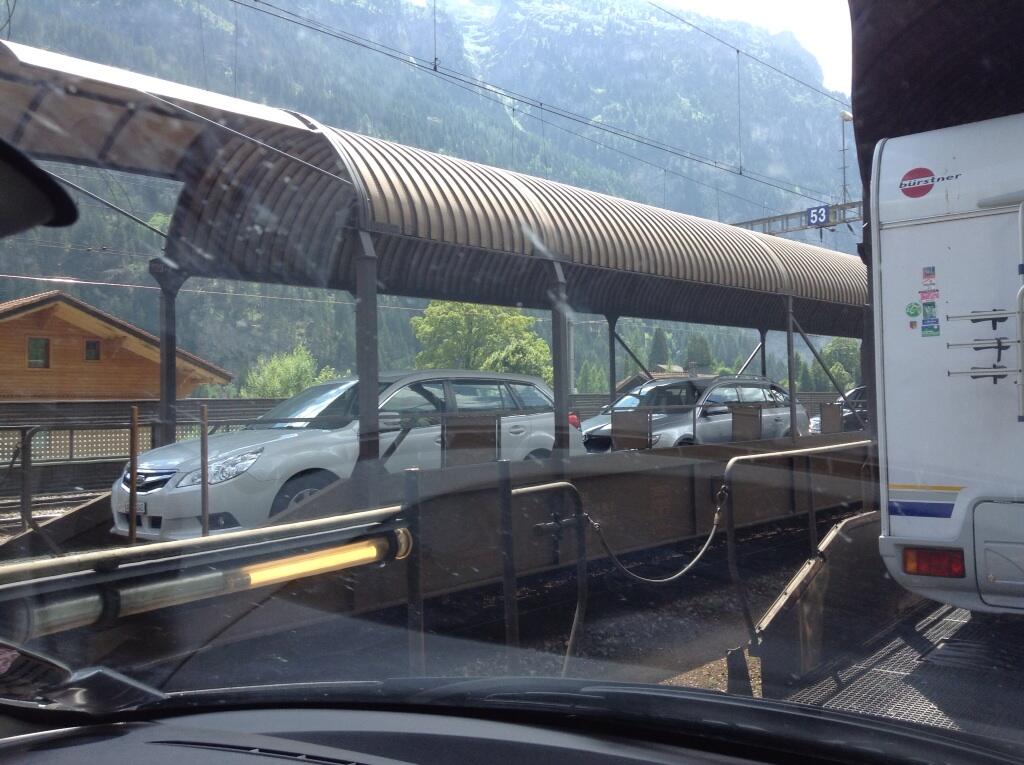 We have two route suggestions:

If you don't fancy driving on the alpine passes, you can book a place on the train that goes right through from Kandersteg to Iselle.  Book at www.bls.ch/e/autoverlad/iselle.php.  This service now operates only a few trains at weekends between April and October.  The journey takes 60 minutes, you stay in the car.  Trains south depart around 0700 or 1800, trains north depart around an hour later.  The cost is CHF 98 one way (2018 price).  With these train times, it probably makes sense to break the journey in Kandersteg, a delightful alpine village, the Adler is particularly recommended if you like your whirlpool bath with you in it to slide out at the touch of a button onto your open air balcony with stunning view of the Alps!!

If you take an early morning ferry across the channel and follow either of the above routes, a wonderful hotel to break the drive is Husseren Les Chateux in Alsace.  It's about 6 hours drive from Calais, and 5 hours from Lake Orta.

To avoid any delays at the motorway tolls and at the Swiss border, French Liber-T boxes, Swiss Vignettes, Italian Telepass devices and Italian VIACards can be bought online at www.tolltickets.com.  Feedback on services provided by this website will be appreciated.

Travelling by Train from the UK

The Eurostar service from St. Pancras International through the Channel Tunnel takes between 10 and 12 hours to Orta-Miasino station, including changes, if you travel during the day.  Overnight service is longer.

The route via Turin no longer stops at Novara, so it can be best to change at Turin (Porta Susa station), otherwise you need to change at Milan and come back to Novara.  From Novara, pick up the local train to Orta-Miasino.  This is the branch-line between Novara and Domodossola, with 5 or 6 trains a day in each direction (no service now on Sundays).

For the route via Domodossola, either take the branch line from Domodossola to Orta-Miasino, or get off at Arona and take a taxi (about 50 euros).

Web sites for booking Italian and European train tickets include www.trenitalia.com and Deutsche Bahn (bahn.hafas.de).  An excellent independent web site with a wealth of useful info on European train travel is www.seat61.com

Notes: for these web sites you must type in the station Orta-Miasino in full with the hyphen!  And don't forget to validate ("convalidare") local train tickets in the yellow machines before you get on the train!

A bus runs from Malpensa airport to and from Novara every one to two hours, this bus is provided by STN (Società Trasporti Novaresi), the timetable is at www.stnnet.it/novaramalpensa.html, cost approx €7.  From Novara, take the train to Orta-Miasino (details above).

The following local firms operate taxis in the area:

More taxi numbers are provided in your location pack.

Rita and Paolo (see above) will be happy to offer a chaffeur service for evenings out or day trips (car or minibus).